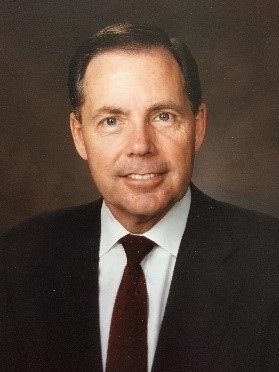 Barton Scott Gillespie left this earth to be welcomed into Heaven on November 8, 2019, after a difficult battle with Parkinson’s Disease. Bart, the oldest son of Walter Scott and Celia Bryson Gillespie, was born on April 12, 1938, and raised in Salt Lake City, Utah. “I have a brother who is 5 years junior of me and a sister that is 10 years junior to me. My parents were very kind to me, spoiled me. I was gone for 2 years in the Navy stationed in Hawaii. I was about 20 or 21 years old. People of the Hawaiian, islands were very special and kind to me.”

Bart met and married Hildred Patricia (Patti) Quinn on February 20, 1959. Bart and Patti have a son, Brett (Pearl) Gillespie and a daughter, Camille Gietz. After their children were born, Bart and Patti moved to Hawaii for several years before moving on to Arizona where the family resided until Bart and Patti retired to do church service.

Bart worked as a general contractor, real estate developer, and a relationship consultant. “I liked all of my jobs. The jobs I liked the most were where I owned my own companies. I didn’t like working for somebody else. The most rewarding was when I was a relationship consultant. I enjoyed that job much more than anything I have done.” In 2000, Bart proudly published his book, “Choosing Your Experience.” For most of his professional career, Bart was a prominent home builder and developer in Mesa, Arizona and his final development was a landmark accomplishment – he was the mastermind developer and founder of the Coral Canyon Community and Golf Course in Southern Utah.

Those who were fortunate enough to know or work with him knew that Bart had a sterling reputation, being a man of his word and having a high level of integrity. He was also known as being incredibly generous and helpful. Most of this generosity was done quietly. Bart was known as a good businessman and a good human being. He was a private man. As such, the way he lived his life was his teachings - not his words. Bart was always very strong and very fit – his gait was very quick. He was a goer and a doer. Bart loved to snow ski, golf, and fly airplanes as a licensed pilot. He owned three Cessna airplanes that he delighted in sharing with family and friends. “I’ve always loved airplanes. The feeling of flying way up there in the sky all by yourself is a celestial experience. I had two death-defying experiences and went down. One time was when my plane was full of boy scouts and couldn’t get the landing gear down on the airplane and the other time, I made an emergency landing right on I-15.” Bart was also very interested in genealogy and traced many family lines back multiple generations and centuries. Bart was very devoted to the Church of Jesus Christ of Latter-day Saints and served as a volunteer in many positions throughout his life. One position he especially enjoyed was training temple workers immediately after a new temple was dedicated. Bart was proud to have attended 35 temple dedications. After retiring, Bart had the foresight to feel that Mainland China would be very important in the future. He and Patti moved to Taiwan to learn Mandarin. Both became quite proficient in the language. Bart could read, write and even type on a Chinese character keyboard. Later, Bart was called to serve in the Taipei Taiwan Temple Presidency. Bart later served as the Temple President and Patti as the Temple Matron, serving in those positions for four and a half years. He also served as a sealer for many years in the Salt Lake Temple and dearly loved counseling with and sealing thousands of couples for Time and All Eternity. Patti passed away in 2010. “The saddest time in my life was when I lost Patti to cancer. We had been together 52 years and we respected each other as best friends.” Bart later met and married his dear Jung Hsiang (Phoebe) Pong (彭蓉香) in the Draper, Utah Temple on June 24, 2011. From his premonition, Bart was able to freely speak Mandarin with her. Phoebe has devoted herself in kindness to Bart and is described by family as a heaven-sent angel. Bart and Phoebe enjoyed eight wonderful years together. Near the end of his life, Bart said, “I had a life well lived with no reservations. I made a success in my life and made a lot of friends at the same time. I love people! I love to work! I am just grateful for what I was dealt. I lived a life worth living.” Bart is survived by his wife, Phoebe; his son and daughter; 9 grandchildren: Dallen Gietz, Sharli Gietz, Garner Gietz, Jordan Gietz, Alexia Decker, Acacia Hansen, Breitton Gillespie, and Angillesa Gillespie; 4 great-grandchildren: Rylee Kilgor, Hadley Kilgore, Kennedy Gietz and Leo Decker; a brother Douglas (Becky) Gillespie; and a sister Joan Walker. Bart was preceded in death by his parents, his first wife, Patti, and a granddaughter, Alexis Gietz, and a grandson, Christian Gietz. A private family service and interment will be held at Wasatch Memorial Park in Salt Lake City, Utah. Special thanks to Roger and Karen Nelson for their faithful care and kind concern during Bart’s final difficult year.