H. Grant Heaton was born June 5, 1929, in the Southern Utah town of Alton. He had four sisters. He was among the first group of missionaries who were called on a mission to the Chinese Mission in Hong Kong in 1949. The Chinese Mission was suspended in 1952 because of the Korean War and so, Elder Heaton enrolled in the University of California, Berkeley, Campus, in a specialized Chinese language class while still serving his mission. President Heaton also attended the University of Utah before and after his mission.

In July, 1952, he was drafted into the U.S. Army. He married Luana Carter, from Park Valley Utah, in December 1952. He was discharged from the Army in May 1954. In July 1955, he was called by President McKay to go with his wife and infant son to open the Southern Far East Mission.

Sister Luana Heaton was born in Park Valley, Box Elder County, Utah. In August 1949, Luana was called to serve in the newly opened Southwest Indian Mission in New Mexico when she was just 20 years old. She has also served in the California Mission in the Arcadia area.

They resided in Salt Lake City, Utah and have five children, twenty-four grandchildren, and one great grandchild.

President H. Grant Heaton was born June 5, 1929, in the Southern Utah town of Alton. He had four sisters. He went to school for seven years at Alton Elementary School. He then rode a bus to Orderville Utah, to attend Valley High School. He graduated in 1947.

He enrolled at the University of Utah in 1948, was called on a mission to the Chinese Mission for a term of four years in 1949. He was the first Elder called to this mision.President Hilton A. Robertson was mission president of this mission.

The Chinese Mission was suspended in 1952. Elder Heaton enrolled in the University of California, Berkeley, Campus, in a specialized Chinese language class.

In January, 1953 he was assigned to Korea where he worked with the United States and United Nations Intelligence services, and with the Prisoner of War command. His assignment was to work with Chinese war prisoners who had either been captured or who had defected during the Korean war.

He was discharged from the Army in May 1954, and enrolled at the University of Utah and was preparing to move to Seattle Washington, when he was called by President McKay to go, with his wife and infant son to open the Southern Far East Mission, in July 1955.

He was not released from his first Mission by President Robertson until he was on his way to Hong Kong as President of the Southern Far East Mission. Although he served in the army in Korea, he still worked under President Robertson, his former Mission President, who had been assigned as President of the Japanese Mission. They had great success in Korea, working with hundreds of Korean students and assisted by Dr. Kim, Ho-Jik. He always considered his military service to be a continuation of his Mission, which was cut short because of the Korean War. His original call to the Chinese Mission was for 4 years. Including Korea, he did serve four years before he was handed his release.

Sister Luana Heaton was born in Park Valley, Box Elder County, Utah, January 30,1929. She attended Park Valley Elementary School through the 8th grade. She then attended Bear River High School in Tremonton Utah for one year. Her final two years of High School education was at Box Elder High School in Brigham City Utah. She graduated in 1947. She enrolled at the University of Utah in the Fall of 1947.

Grant and Luana met at the University of Utah. They both attended a dancing class and were attracted to each other. A casual courtship ensued.

In August 1949, Luana was called to serve in the newly opened Southwest Indian Mission in New Mexico. She was just 20 years old. At that time, sister missionaries were not called until they were 23. She left for the mission field in October, 1949.

Grant received a call to serve four years in the Chinese mission, in September 1949. (That mission was just in the process of being opened.

Luana was released from her mission in July 1951, and began teaching school at the Park Valley, Elementary School.

Grant came home from the mission field in June, 1952. He was soon drafted into the Army.

Grant and Luana were married on December 19,1952, while Grant was on furlough before being sent to Korea, where he served with Military Intelligence and Prisoner of War Command for 17 months.

While Grant was in Korea, Luana was called to serve in the California Mission in the Arcadia area. She was released in April and was home when Grant returned from Korea in May, 1954.

Grant enrolled at the University of Utah, and they were preparing to move to Seattle Washington to attend the Far Eastern Institute study program. Their first child, Grant Heaton Jr. was born in March 1955.

President and Sister Heaton were called to open the Southern Far East Mission in May, 1955. They were then just 26 years old. They served in the mission field until December 1959. Two more children were born while they were in the mission field, Lisa Lee Heaton, and Eric Eugene Heaton,

In 1968, the Heatons, who now had two more children, Kwan Carter Heaton, and Patricia Anne Heaton, returned to Salt Lake City, where they have resided since that time. They have made their home in Holladay Utah.

Grant Heaton has been involved in various business ventures in the United States, China, Singapore, Taiwan, Hong Kong and Japan. Luana has accompanied him on many of his extended trips to China from 1982-1993.

H. Grant Heaton ‘graduated’ from this life on the morning of Saturday, November 19, 2011. He was born on June 5, 1929 in Alton, Utah to Herald Hoyt and Ellen Johnson Heaton. He was the only son of five children with two older sisters and two younger sisters. (Eudora, Mary Deen, Flora May and Karma). In 1937 he lost his mother on Christmas day to pneumonia, and in 1940 his father married Dollie Garrison. He spent his youth in the mountains of Southern Utah riding horses and farming. He attended Valley High School where he played football, basketball, baseball, and track and field. He also attended the University of Utah where he met his sweetheart Luana Carter in a ballroom dancing class.

In 1949 he was called to serve a four-year mission for the Church of Jesus Christ of Latter-day Saints in China, which was cut short due to communist revolution. He served the remainder of his mission in Hawaii and China Town San Francisco. He was drafted into the army in 1952. He married his eternal companion Roxcy Luana Carter on December 18, 1952 in the Salt Lake Temple and was deployed to the Korean War on January 1, 1953 where he worked in military intelligence for 18 months.

All of those experiences, beginning with his mission, prepared him in 1955, to receive a call from President David O McKay to serve as the first mission president in the newly opened Southern Far East Mission. This was a defining chapter in his life, where, as a 25-year old father, he began spreading the gospel in China, Guam, Singapore, the Philippines and all continents in South East Asia. Missionary work was very important to President Heaton, as well as the relationships with his missionaries, most of whom he continued to associate, until his death. He had a firm testimony of the gospel, of which he bore often. He was a gospel doctrine scholar, a teacher and loved sharing his knowledge with family and friends. He used his passion for education during the 1960’s when he was called as the Church Institute and Seminary coordinator in the Pacific Northwest Region.

He spent his professional career as an entrepreneur. He had a brilliant mind, and many enterprises he pioneered were years ahead of their time. His crowning achievement, however, was his family.

(From Obituaries of President Heaten) 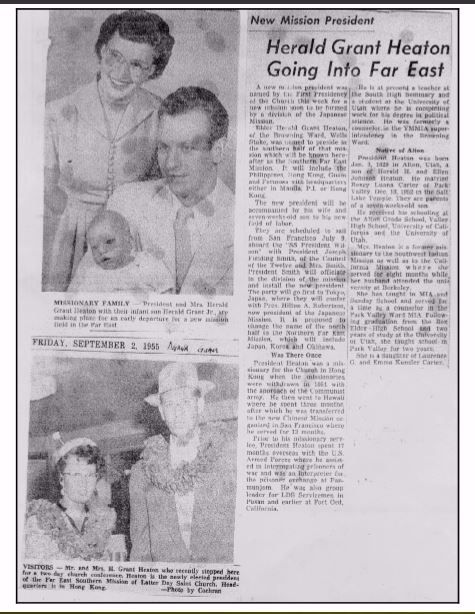 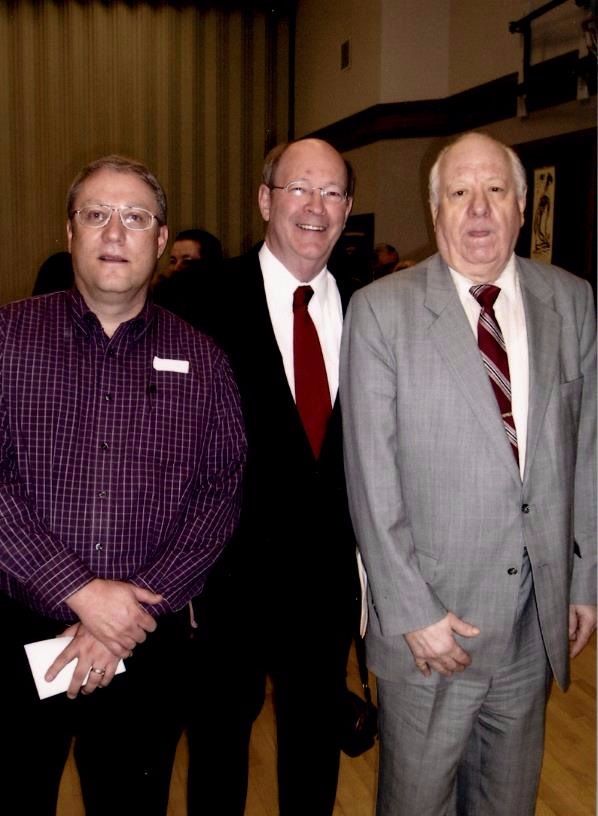