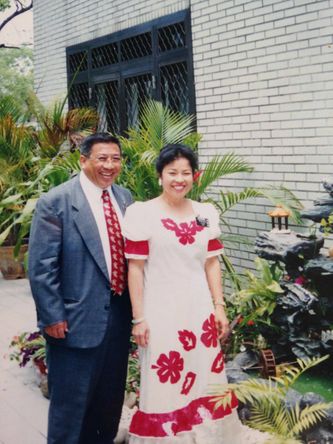 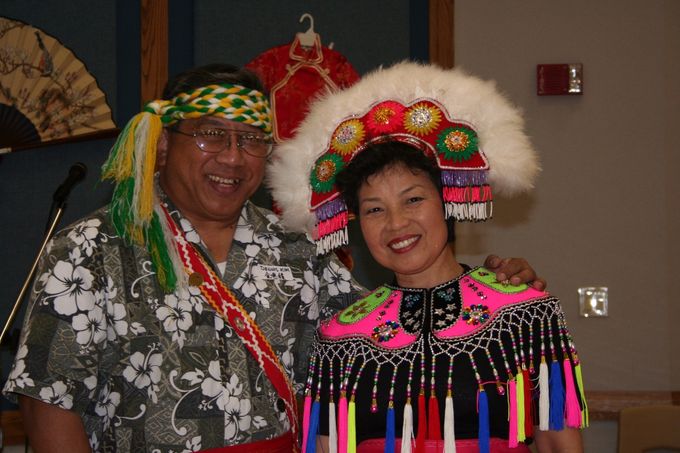 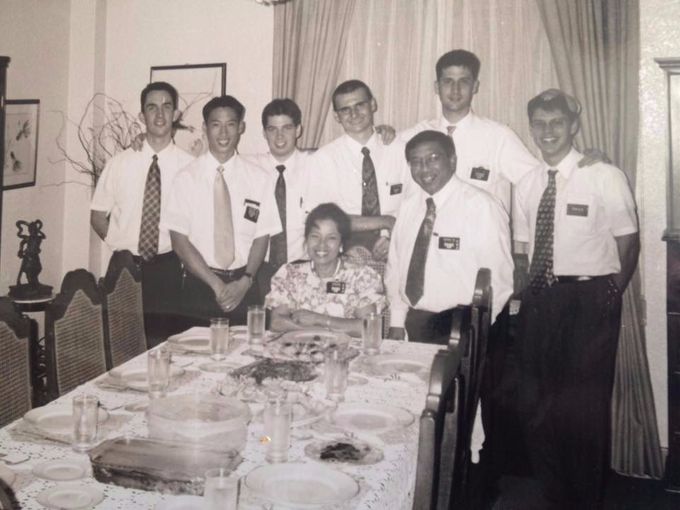 Dining in the Mission Home with Office Elders 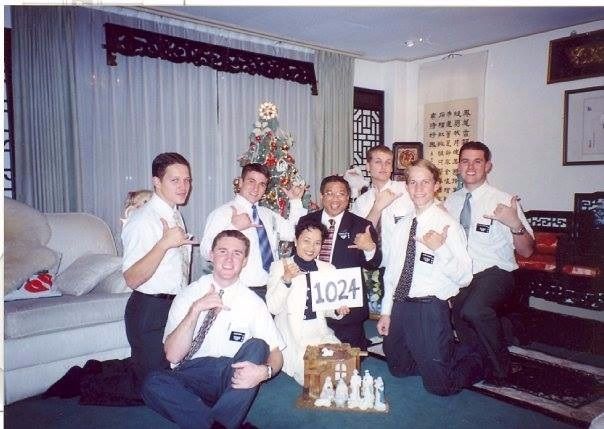 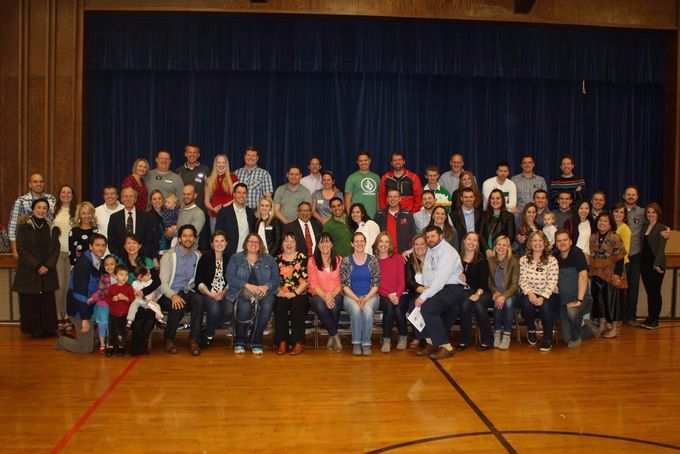 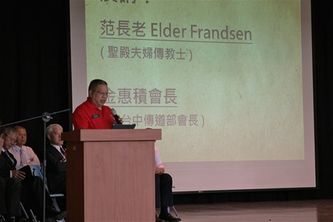 This is the talk that President Kim gave at the 60th anniversary reunion of all RMs in Taichung.

This year is a special. 50 years ago, I first came to Taiwan to start my 2 1/2 year mission. I also reached my 70th Birthday. I had no control over these two events, but now I see the Hand of the Lord using me as one of his tools to fulfill his work and his glory: (Moses 1:39)

Over these years I have seen many changes and experiences in my life. I call them miracles. Let me reminisce a little.

The first miracle was that I was able to learn a completely new language, culture, and traditions and make a wide circle of new friends: Haole, Chinese, Taiwanese, and Aborigines. In 1966, when I first arrived in Taiwan, I couldn't even say, "Ni hao ma?" So today, using Mandarin to give this speech is a miracle.

The most important to me was that I was able to know and marry my two wives. (Of course I speaking of consecutive, not concurrent marriages.). In Hawaii, I already have a large family. But, I added an even larger family. I now have 23 grandchildren.

Another miracle was that I have seen great growth economically, educationally, and spiritually. In 1966, Taiwan was a truly third world country. There was still Martial law (jie yen fa). MPs patrolled the streets, No one could go to the beach or take pictures there because military barracks dotted the beaches. Children had to test into Middle School, High School, and College. There were no freeways, no 7-ll, McDonalds, or other western chain stores. Other than Taipei, All the towns had basically two or three main streets: Zhong Hwa Lu, Zhong Zheng Lu, and Zhong Shan Lu. 0ur Church had eleven branches and 80+ missionaries. Taiwan was a Zone of the Southern Far East Mission, and the whole zone was one district. Many branches had Missionary Branch Presidents.

In 1998, when Sister Kim and I returned as Mission President and wife. The country was in an expansion mode. You could rarely see any soldiers on the streets. Like the US, education was guaranteed to students up to High School. There was #1 freeway north to south, they were starting to build #3 freeway. But it still took us up to three hours to drive from our mission home to the Taoyuan Airport because they were adding a third lane to the #1 freeway. Everywhere you went you could see a 7-ll, Mc Donald's, and other stores. The church now had a Temple, three missions, 6 stakes, three districts, and a hundred units. Baptisms increased, but more important retention increased.

Today, We now see Taiwan as a modern developed nation. There is now a High Speed Rail system, true political parties which are just as divisive as the US, home prices which are almost as high as in Hawaii, and students can get a college education. There are now seventeen stakes in two missions, including the Hualien Stake. It is a miracle how a little branch in Hualien when I was Branch President with eighty member on the roll and thirty attending church has grown over the years to become a stake.

To me, all this economic, political, educational, and spiritual growth is a Miracle. It did not happen by chance. I see the Lord's hand in granting Taiwan the freedoms that you now enjoy, so that the Church can continue to progress in the future. Everyone here is a tool in God's hand. Some of us are about to go the way of the Earth, But many of you are young and will be around for the 100th anniversary. I hope you will attend because you are still active in church and helped build the church over these years. When you returned from your mission, you became an RM, God's highest quality tools. What kind of growth Taiwan has in the future will depend on you and your vision of the future. But the method is the same today as it was for us:

2. Accept Church callings and do you best to fulfill it.

4. Share your testimony every day by example and boldness. At the very least, let others know that you are a member of this great church.

5. Finally, you must endure to the end.

It is my hope that you will feel my love and Aloha. When you return to your wards and branches, commit yourselves to move God's work forward.

This is my testimony In the name of Jesus Christ, Amen. 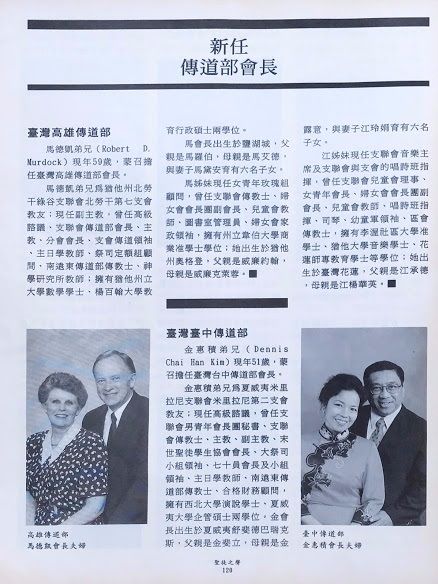 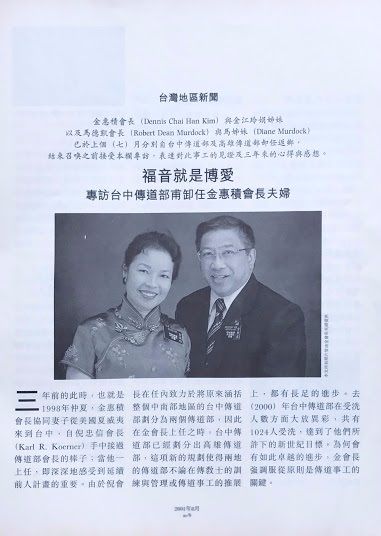 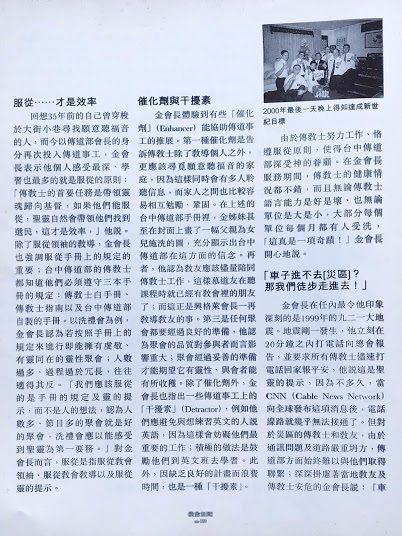 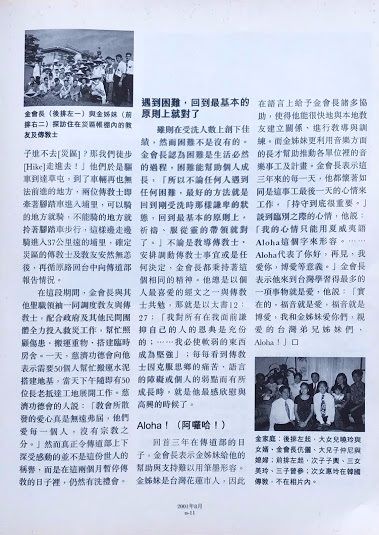